It could have been worse. Much worse. A few weeks ago, I gave my son my truck keys and offered to let him use it to go to the store. His van was covered in snow and was parked in front of my other son’s car. I was glad to loan my truck for a few minutes, and we even watched our granddaughter while he and his wife went to get some food.

No more than five minutes passed when I received a phone call: “someone pulled in front of us,” he screeched. “I didn’t even see her… the truck is wrecked.” 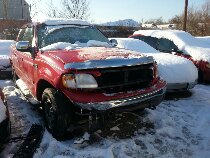 I quickly got down to the scene of the accident and saw what he meant. Of course, it was very clear that the accident was not in any way his fault. The truck was surely going to be totaled, but I was worried more about the other driver and them. Thankfully, no one was seriously hurt.

As I later reflected on the accident, I continued to remind myself of several things:
1- Everyone was fine
2- I was fully insured
3- Trucks can be replaced

However, one thing stood out above all else: when I was at the scene of the accident, one of the police officers told me plainly that if they were in something other than a big truck like mine, they probably would have been hurt. For that, I praise God.

Soon, my prayers to God over this has been to thank Him for taking my truck and saving my family from harm. God always knows better than us, and maybe, just maybe, this whole chain of events occurred so He has a new testimony of His providence and provision. If so, I thank God for that!